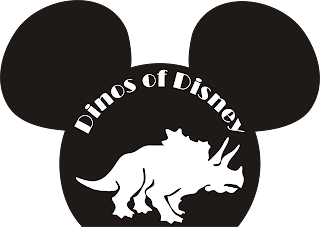 This is from a trip I took back in December of 2017 to Disneyland, during a spontaneous Christmastime trip. The first part we are going to look at is at Big Thunder Mountain.

The Dinosaur of Big Thunder Mountain

Big Thunder Mountain is one of the main roller coasters of Disneyland that has been replicated 3 other times in parks around the world (two of which also have the dinosaur). The theme of the ride is based on Monument Valley, a Navajo Tribal Park that straddles the border between Arizona and Utah. Here is the setup for the ride from Disney:

"Legend has it that after gold was discovered in the 1850s, eerie incidents took place in the mine. Trains would take off and race through tunnels… by themselves.

As you enter the cursed cavern, your train speeds up along the rickety track. Shoot under a booming waterfall and dodge a falling boulder from an unexpected landslide as you swoop around sharp turns and drop into desolate canyons.

On this rip-roaring adventure, you may learn that some legends turn out to be true..."

As you whip around the track, you eventually end up face-to-face with a dinosaur skeleton.

The skeleton is interesting because from my view at night, it is really hard to determine what kind of dinosaur it is. Getting some better shots from Disney we can definitely get a clearer view of the dinosaur.
And looking closely at the skull you can tell that it is probably meant to resemble a Tyrannosaurus rex skull, but it's ... off. Let's compare it to arguable the most famous T. rex, the Field Museum's SUE.

And I think, after comparing the Big Thunder Mountain T. rex to SUE, the biggest problem with the skull is the teeth. It's as if the designers tried to cram as many teeth as they could into the mouth, and all of the teeth are the same size, whereas in the real skull the teeth are constantly coming to replace lost or worn teeth, so the size and spacing of the teeth differ widely within the actual T. rex's mouth. The overall dimensions of the fenestra (holes) are also smaller in the Disney skull than in the real animal, however I could attribute that to making the skull more durable with more surface area.
What I really wondered was where did the idea of this dinosaur come from. Was it meant to be a T. rex or something else. I find it really telling that the D23 post called "The Ultimate Dino-Tour of Disney Parks all Over the World" that goes over many of the dinosaurs in the Disney Parks just calls this "the bones of a dinosaur". No attempt was made at even naming the species, whereas they name the species of many of the other dinosaurs in the post.
Tony Baxter himself, designer of Big Thunder Mountain, stated that the dinosaur bones were meant as a tribute to the previous incarnation of the ride. Parts of the ride and theme were actually taken from the previous renditions of the ride called Rainbow Caverns Mine Train, which was then converted into the Mine Train through Nature's Wonderland. However, I haven't been able to find any pictures of any dinosaurs from those versions. The closest thing I could find, was that the second version mentioned dinosaurs during the ride, but that was about it.
So although many Disney fans seem to have unanimously determined that this is a T. rex skeleton, Disney itself has shied away from denoting it as anything other than a "dinosaur".
Posted by Jim L. at 1:10 PM