My next post about the Geology of the National Parks Through Pictures continues the Spring Break trip of 2020 where we visited the Needles District of Canyonlands. On the same trip we hit up one of our last remaining parks in Utah. 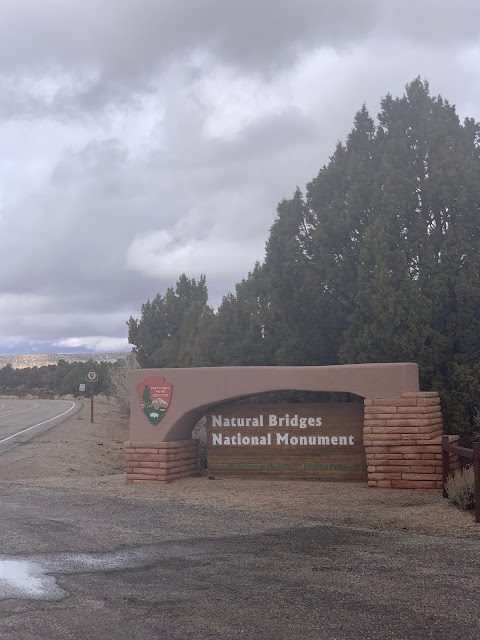 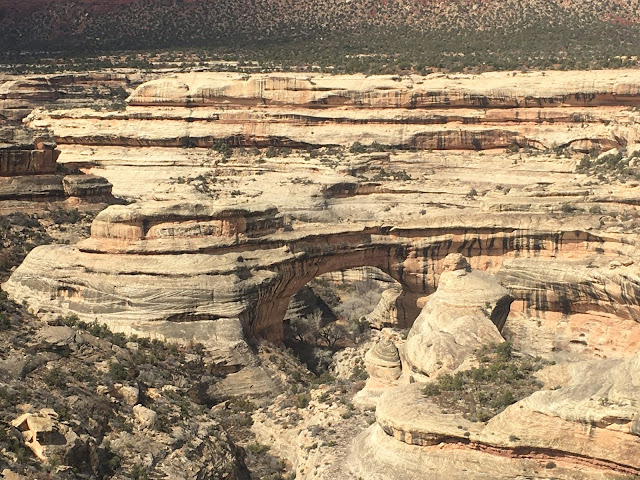 Each of the bridges is given a name in Hopi to honor the ancestral Puebloans who once lived here. The loop is a one-way drive so you can hit up each of the bridges in order. The first bridge is known as Sipapu bridge, which means "the place of emergence", an entryway by which the Hopi believe their ancestors came into this world.

Here is a zoomed out, panoramic view of Sipapu bridge from the overlook. The bridges occur within the Permian age Cedar Mesa Sandstone (~286 million years old), which is formed from near-shore sand dune deposits (the whiter, more resistant layers) and has frequent river and lake deposits (the redder, softer layers). This is the same formation that produces the needle formations within the Needle's District of Canyonlands National Park. 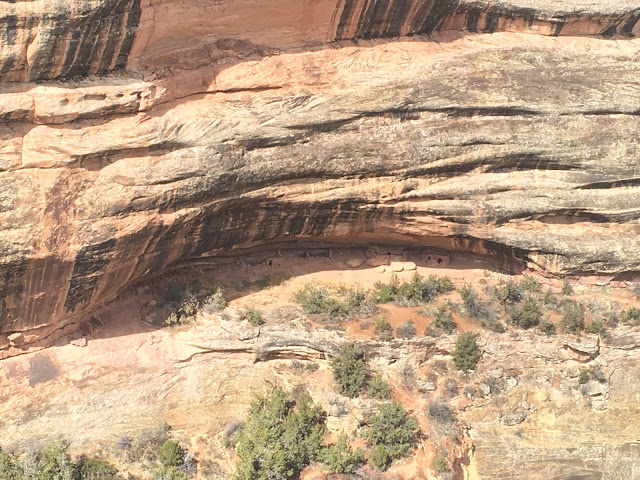 This region had been occupied off and on throughout the past several thousand years, with the ancestral Puebloans farming and building houses within the alcoves of the cliffs using the Cedar Mesa Sandstone as building stones. The houses were built between 1000 and 1270 CE, when eventually they left, likely due to environmental changes. 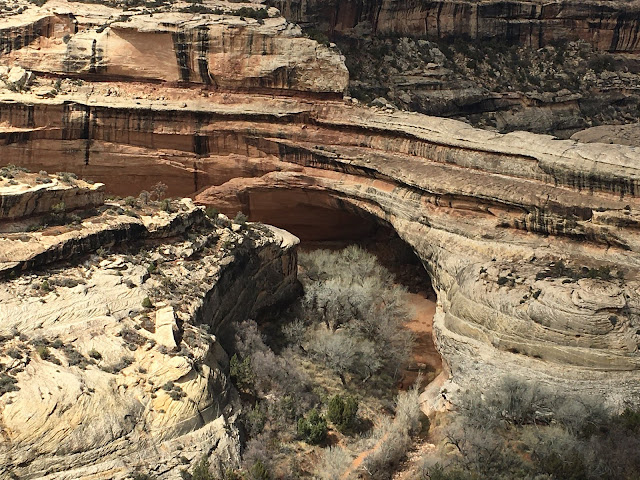 The second bridge on the loop is Kachina bridge, which is named for the rock art on the bridge that resembles the symbols commonly used on kachina dolls. Although "bridges", such as those seen here, and "arches", such as those seen at Arches National Park, are similar in structure they have different definitions. By definition, a "bridge" has water running underneath it, while an "arch" does not. However, they also form differently. While an arch forms from the slow dissolution of the cement within the sandstone and eventual erosion of the sand, a bridge is formed by river processes.

The three different bridges formed slightly differently, but all three of them have the same basic formation. This area is part of the Colorado Plateau, a region that has been slowly lifted upwards over time. As the ground surface is lifted up, the rivers cut down into the ground. This creates what is known as an entrenched meander, meaning a bend in the river that is firmly in place within the surrounding rock. Many rivers within the Colorado Plateau have formed these features including the Grand Canyon and Dead Horse State Park. Even though the meanders are entrenched, that doesn't mean they stop eroding the surrounding landscape. The rivers slowly cut through the outside of the meander by the forces of erosion and the increased water speed on the outside of the meander, eventually cutting off the old meander. This is the exact same process that goes on in all meandering river systems, like the Mississippi River, however since this river is entrenched, when it cuts off a meander it is doing so below a rock ledge, leaving behind a bridge of rock. Image from the NPS.

Here is a zoomed out view of the Kachina bridge, which is located on the right of the image. This view we are facing the outside of an entrenched meander, with the cut-off meander far in the background. The current river now flows in the entrenched meander at the front of the photo.

The final bridge, and the one we hiked to, is known as Owachomo bridge and means "rock mound", in regards to the mound of rock on top of the bridge seen on the left side of this photo. 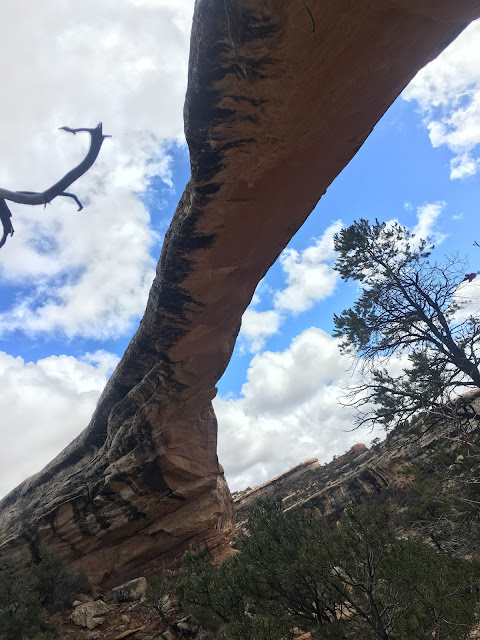 View from below the Owachomo bridge. As long as water continues to flow under these bridges they will continually be eroded until they collapse. However, since this area is in the high desert, rain fall is relatively low and therefore the rivers are more like a trickle of streams at most times, preserving the bridges for many years to come. 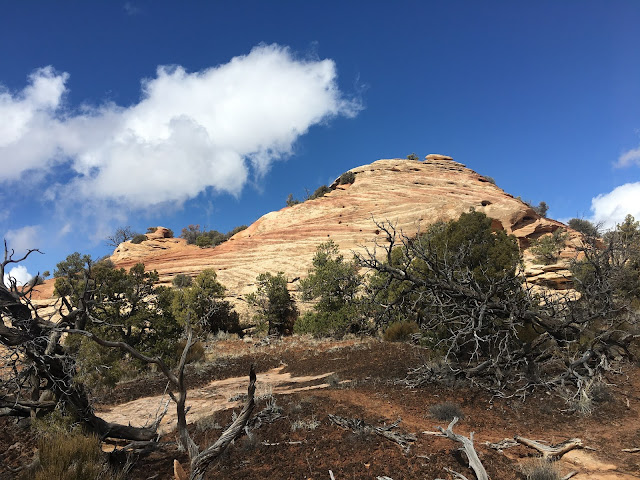 Here is a view of some of the cross bedding within the Cedar Mesa Sandstone, which indicates that this particular part of the formation was once a sand dune. The cross beds are formed when sand is blown over the top of a dune crest and rolls down the opposite side. As it rolls down the leeward side, or slickface, the sand piles up in parallel layers that are at an angle to the ground surface, which is what is preserved as cross beds within the rock unit.

Here are more preserved cross beds in the Cedar Mesa Sandstone. As dunes shift directions, based on the wind direction, the cross beds change direction to match. This results in stacks of cross beds often going in different directions.